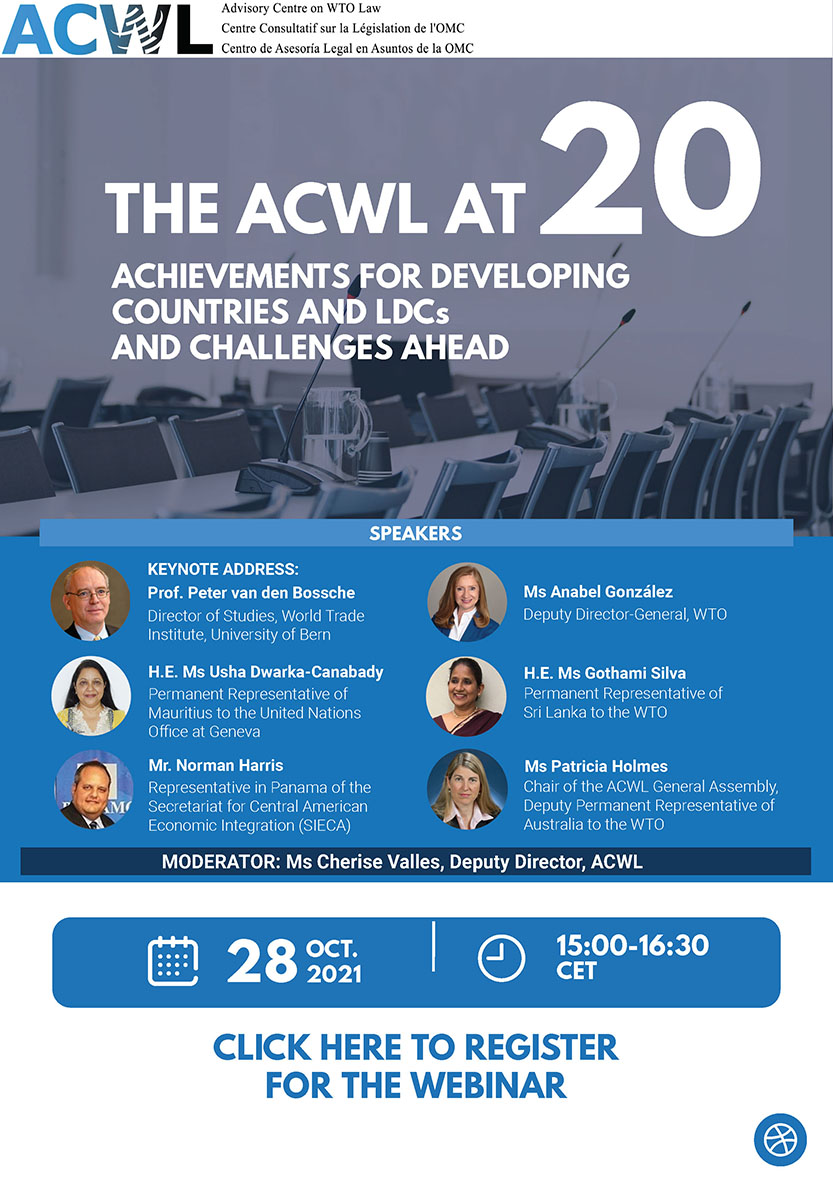 On 28 October, to celebrate its 20th anniversary this year, the Advisory Centre on WTO Law (ACWL) held a webinar titled “The ACWL at 20: Achievements for Developing Countries and LDCs and Challenges Ahead”.   Over 100 people attended the webinar, which can now be seen here:

Or you can stream it directly at Zoom:
https://us02web.zoom.us/rec/share/R_wibksfriXD39IcI71KILuRo3pSYeHDJ9VBEasCKf0hnMatx_6ApQDI2orINo_z.ToPLxLoE0ZamQflS
(passcode:  xkMV6?En)

The webinar was moderated by Ms Cherise Valles, Deputy Director of the ACWL.  In her introductory remarks, Ms Valles noted that the ACWL is probably the smallest international organization in Geneva.  Ms Valles summarized the achievements of the ACWL over the past 20 years.  She noted that there is a real demand by developing and least developed countries for the legal services of the ACWL, which enable them to participate more effectively in the multilateral trading system.  She thanked these countries for the trust they have placed in the ACWL.

Mr. Niall Meagher, Executive Director of the ACWL, thanked the speakers for their participation and explained that the ACWL regretted not being able to conduct in-person activities to mark the 20th anniversary.

Following the keynote address, five distinguished panelists spoke about their interactions with the ACWL over the past 20 years:

Webinar on “The ACWL at 20: Achievements for Developing Countries and LDCs and Challenges Ahead” Available for Streaming2021-11-022021-11-09https://www.acwl.ch/wp-content/uploads/acwl-147x54-logo.svgACWLhttps://www.acwl.ch/wp-content/uploads/acwl-at-20-webinar-invitation.jpg200px200px
© 2022 ACWL, All Rights Reserved - Design by DVDesign & Greenwaters
Contact Us