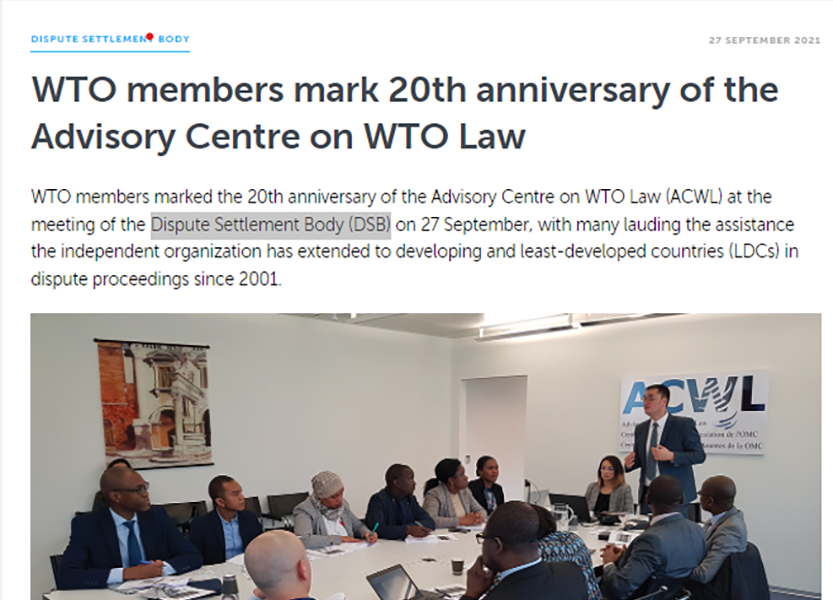 At its meeting on 27 September 2021, at the request of Australia and Guatemala, the WTO Dispute Settlement Body marked the 20th anniversary of the ACWL.  In addition to Australia and Guatemala, 35 other WTO Members made statements praising the work of the ACWL and its important role in the rules-based multilateral trading system.  Many of these Members also paid tribute to the developed country Members that have provided the bulk of the ACWL’s funding and urged them to continue to ensure the viability of the ACWL.

In her remarks to mark the occasion, WTO Director-General Ngozi Okonjo-Iweala said that “the ACWL is a testament to WTO Members’ commitment to an inclusive multilateral trading system, in which all Members can take full advantage of the benefits of rules-based trade.” She emphasized that “moving forward, the ACWL’s continued work will be an important contribution to our efforts to strengthen confidence in dispute settlement and in the WTO.”

Introducing the agenda item, Australia said that it sees the ACWL “as a valuable component to the multilateral trading system which helps enable full and effective participation of all WTO Members, irrespective of size or resourcing.” The ACWL therefore provides benefits to all Members because the essential nature of the multilateral trading system is enhanced when the availability is open to all Members. We look forward to continuing our active contribution, and we strongly encourage other Members to support this important institution.”  Guatemala said that “at this particular juncture in time, where the WTO needs to be inclusive and foster growth and economic recovery, Guatemala would like to encourage developed country Members to take a closer look at the results and benefits that the ACWL brings to the rules-based multilateral trading system as a whole and consider the possibility to contribute to the financing efforts of this important institution.”

Intervening on behalf of the African Group, Nigeria stated that “the African group fully supports the work of the ACWL in ensuring that sound and confidential legal advice is given to the countries who have requested their assistance.”  Nigeria noted that in 2020 alone, 17 different African countries sought a total of 55 legal opinions from the ACWL, which constituted about 25 per cent of the ACWL’s legal opinions in that year.  Nigeria said that “these legal opinions have assisted the beneficiary countries in better understanding their rights and obligations under the WTO agreements and to facilitate their integration into the rules-based multilateral trading system.”  Similarly, on behalf of the LDC Group, Chad stated that for the LDCs, the ACWL is an extremely important, relevant, and useful institution, which supports the LDC Group on all issues of WTO law.

Among the developed WTO Members that intervened, the European Union said that the work of the ACWL was important because “equitable access to the WTO’s dispute settlement system and, for that purpose, access to high quality legal advice and representation in such procedures benefits the entire WTO Membership. It is part of the underpinnings of the rules-based multilateral trading system that should benefit all WTO Members, large and small.”

Responding to reports of the meeting, in separate comments, Niall Meagher, Executive Director of the ACWL, expressed the ACWL’s appreciation for all of the positive comments made at the DSB meeting. He noted that “as a non-political organization whose mandate is strictly limited to providing legal advice, it is quite proper that much of our day-to-day work stays in the background. We are therefore grateful to Australia and Guatemala for taking the opportunity to shine some light on our work and we very much appreciate the support and compliments from such a diverse range of WTO Members during the DSB meeting.”

A more detailed description of Members’ statements on the ACWL at the DSB meeting will be available when the DSB releases the minutes of the 27 September meeting in the coming weeks.