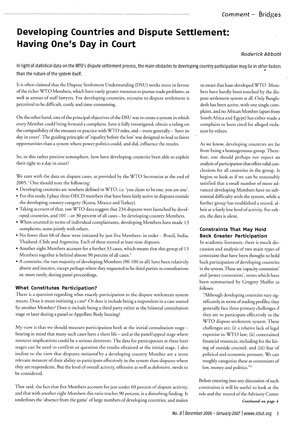 An article by Roderick Abbott on “Developing countries and dispute settlement: Having one’s day in court” in Bridges comments favourably on the role and record of the ACWL. Mr. Abbott reviews the statistical data indicating that the ACWL has given assistance to developing countries in about 20 per cent of all dispute settlement cases initiated since mid-2001. He states, “[t]he key message here is that the ACWL has provided a service that its members clearly appreciate.”

The article in Bridges was published by the International Centre for Trade and Sustainable Development (ICTSD) in the Year 10, No. 8, December 2006-January 2007 issue. It can be accessed by clicking on the weblink below: