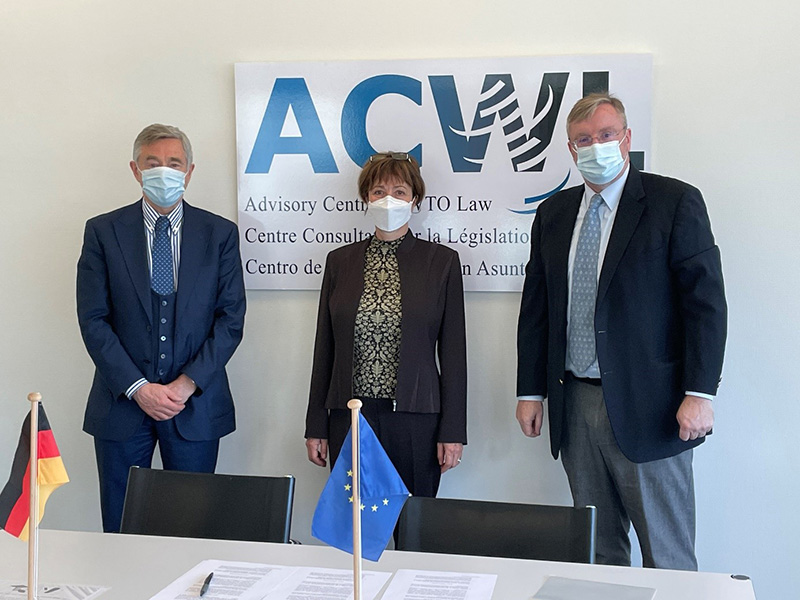 Germany has formally acceded to the Agreement Establishing the Advisory Centre on WTO Law (ACWL), becoming the 12th developing country Member of the ACWL.  Germany had become the ACWL’s first Associate Member in 2017 and subsequently began the process of acceding to the ACWL as a full Member.  Germany’s accession was approved by the German parliament on 1 July 2020.  Following the completion of the remaining internal procedures, Germany’s Protocol of Accession was signed by the German Ambassador to the WTO, H.E. Dr. Bettina Waldmann, and the Executive Director of the ACWL, Mr. Niall Meagher, at the ACWL on 31 March 2021.  The Deputy Director-General of the WTO, Dr. Karl Brauner, attended the signing.  In accordance with its terms, the Protocol formally took effect on 9 July 2021.

Mr. Meagher said:  “I would like to thank Germany for its interest in and its support of the ACWL and its mission.  I am very grateful to all of our colleagues in the German government who have worked very hard over the past few years on the process of securing the necessary internal approvals for Germany to join the ACWL.  On behalf of the developing and least-developed countries that use the services of the ACWL, I would like to express a sincere thank you to all involved.”

The ACWL is an intergovernmental organization, independent of the WTO, located in Geneva, Switzerland.  The ACWL’s mandate is to provide its developing country Members and the least-developed countries entitled to its services with (i) legal advice on WTO law; (ii) assistance in WTO dispute settlement proceedings; and (iii) training on WTO law.   The ACWL has 12 developed country Members and 38 developing countries.  In addition, 44 least-developed countries that are Members of the WTO or in the process of acceding to the WTO are automatically entitled to the services of the ACWL without needing becoming Members.

The ACWL’s Report on Operations for 2020 may be downloaded here.