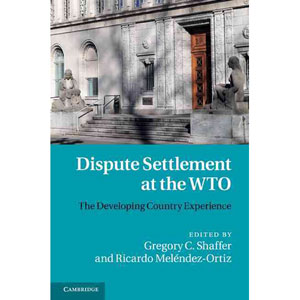 The study, edited by Gregory C. Shaffer and Ricardo Meléndez-Ortiz, forms part of the International Centre for Trade and Sustainable Development’s (ICTSD) Dispute Settlement Project. It analyses the experiences with WTO dispute settlement of nine developing countries in Asia, Africa and South America, including five entitled to the services of the ACWL, namely, Bangladesh, Egypt, India, Kenya and Thailand. Based on empirical work by academics, officials and legal practitioners, the book explores the strategies these countries have employed to influence and benefit from the WTO legal system and the challenges they have faced in doing so.

In reviewing the experiences of Bangladesh, the first LDC to initiate a dispute in the WTO, Professor Taslim notes that “the services provided by the ACWL on concessionary terms were absolutely essential in preparing for and conducting the case” against India’s anti-dumping duties on batteries from Bangladesh. He concludes that “other LDCs that suffer from similar capacity constraints would certainly need the legal services of the Advisory Centre in seeking redress from the unfair trade impositions of more powerful countries. It is thus essential for them to ensure that the Advisory Centre is sustained.”

In the chapter on Thailand’s participation in WTO dispute settlement, Pornchai Danvivathana identifies the “competence” and “reputation” of the ACWL as two important factors behind Thailand’s decision to engage the services of the ACWL in its complaint against European Union sugar subsidies.

The publication’s full citation is: Gregory C. Shaffer and Ricardo Meléndez-Ortiz (eds.), Dispute Settlement at the WTO: The Developing Country Experience (Cambridge: Cambridge University Press, 2010).Further information regarding this publication, including an excerpt and interview with the Executive Director of the ACWL, Frieder Roessler and Chief Executive of the ICTSD, Ricardo Meléndez-Ortiz, is available here (http://ictsd.org/i/publications/98179/).

Dispute Settlement at the WTO: The Developing Country Experience2011-01-062015-11-20https://www.acwl.ch/wp-content/uploads/acwl-147x54-logo.svgACWLhttps://www.acwl.ch/wp-content/uploads/dispute-settlement-at-the-wto-the-developing-country-experience_1935280.jpeg200px200px
© 2022 ACWL, All Rights Reserved - Design by DVDesign & Greenwaters
Contact Us