Ms Olga Falgueras del Alamo joined the ACWL in 2022 as Associate Counsel. She previously worked at the Rules Division of the WTO from 2015-2022, providing support to panelists and the WTO Secretariat in dispute settlement proceedings related to trade remedies.

Before joining the WTO, Ms Falgueras del Alamo worked as researcher in the Centre for the Study of European Contract Law at the University of Amsterdam, specializing in matters related to insolvency law and the harmonisation of European law. Previously, she worked in several private law firms of the South of Spain (Malaga) for several years. 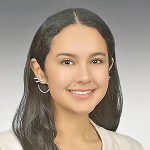 Valentina Botello León
We use cookies to ensure that we give you the best experience on our website. If you continue to use this site we will assume that you are happy with it.Ok